December 2022
Reader’s Digest Select Editions calls Jeff “one of our new favorite authors” and as for his Chief Inspector Andreas Kaldis Series: “These terrific novels which take place on the Greek Islands, have not only kept us all turning the pages to see whodunit, but have also significantly added to our personal bucket lists of places to visit.”

February 2022
The cover of Reader’s Digest Select Editions #383, featuring the latest Andreas Kaldis novel, A Deadly Twist, as one of its four selections for that volume, along with works of William Kent Krueger, Mia P. Manansola, and Freya Sampson. 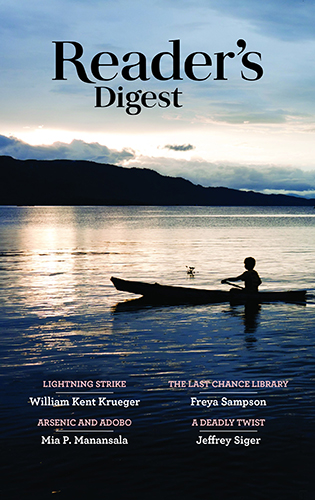 Beyond the Cover with Jeffrey Siger
CBS News-Pittsburgh, May 13, 2022

Jeffrey Siger in conversation about One Last Chance
Interviewed by Barbara Peters for The Poisoned Pen Bookstore, April 4, 2022
Watch →

Published Essay featuring A Deadly Twist
“Why Traveling Through Fiction is a Form of Ecotourism,” Crime Reads, April 9, 2021
Read →

Exciting News for All Jeff Siger Fans—a TV Deal to bring Andreas Kaldis to the Screen!
Viewpark has optioned Jeffrey Siger’s Andreas Kaldis book series for screen adaptation and plans to go into production in 2021, filming on location in Greece, and partnered with Dorian Productions to produce the series. February 4, 2021
Learn more →
Read Press Release →

Jeffrey Siger on “In the Spotlight”
with Yanna Darilis, January 6, 2021

London School of Economics Entrepreneur Society TalkTank Podcast
Jeff was interviewed as one who “thinks, lives, and breathes outside the box.” He was part of its “Artistpreneur” series in which interviewees shared their life experiences as advice to those who might be considering pursing a life in the arts. November 17, 2020
Listen →

An American lawyer gave up his career and became a ‘Greek’ thriller novelist
by CNN-Greece interview by Elena Kefalogianni, June 28, 2020
Read →

Jeffrey Siger selected as one of “5 Authors Churning Out Suspenseful Thrillers”
by Wiki, April 7, 2020
Watch →

Jeffrey Siger Talks Mykonos and Lesvos at Rhenia Hotel
by Billy Cotsis, May 17, 2019

The full-length, award-winning 2018 documentary, “Mykonos: the other side,” featuring Jeff

Jeff designated as Thriller Novelist of Record for Greece
The New York Times Book Review, August 10, 2018
In an article first appearing in The New York Times Book Review “Thills and Chills” special issue, titled “All the World’s a Crime: Thrillers from Around the Globe,” Jeff is selected as representing Greece (#25 on its World Thriller Map).
Read →

Jeff hailed as “literary star”
Athens Insider Magazine, April 18, 2018
In an article describing the start of “Athens 2018–World Book Capital,” a title the city shall hold for one-year, Athens Insider announced it shall host two “high-profile literary events,” including one in late September, “celebrating Greece’s fame as a muse for foreign scribes throughout the ages and featuring literary stars such as Victoria Hislop, Patricia Storace, Jeff Siger and Sofka Zinovieff.”
Read →

Jeffrey Siger, In the Hot Seat
Interviewed by Lesa Holstine for the Poisoned Pen, October 12, 2016
Read →

An interview with Jeffrey Siger
Greek Island Books, May 19, 2013
Read →

A Mystery Writer with a Greek Heart
greeka.com, October 5, 2010
Read →