I am an American living on the Aegean Greek island of Mykonos. A Pittsburgh native and former Wall Street lawyer, I gave up my career as a name partner in my own New York City law firm to write mystery thrillers that tell more than just a fast-paced story. My novels are aimed at exploring serious societal issues confronting modern day Greece in a tell-it-like-it-is style while touching upon the country’s ancient roots.

The New York Times Book Review has honored my work by designating me as Greece’s thriller novelist of Record, and the Greek Government’s General Secretariat of Media and Communications has selected me as one of six authors—and the only American—writing mysteries that serve as a guide to Greece.

Some Mykonian friends told me if I started sprinkling murders with a message across my adopted country’s tourist paradises, I’d likely be banished, if not hung. No one was more amazed than I when my debut novel, Murder in Mykonos (a sort of Mamma Mia setting for a No Country for Old Men story), became Greece’s #1 best selling English-language novel (and a best-seller in Greek, as well). 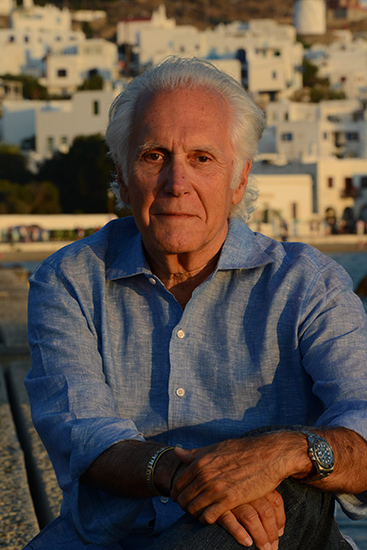 Downloadable Photo
With many Chief Inspector Andreas Kaldis novels out there, I receive no more than the customary number of death threats. I’m diligently trying to improve my percentage in that regard with posts about Greece each Saturday on the Murder is Everywhere blogsite I share with nine renowned mystery writers from around the world.

It’s been a remarkable journey, punctuated most notably by The New York Times selecting the fourth in my Andreas Kaldis series (Target: Tinos) as one of its five “picks for the beach” while calling the entire series, “thoughtful police procedurals set in picturesque but not untroubled Greek locales;” Left Coast Crime’s nomination of the fifth in the series (Mykonos After Midnight) in 2014 as Best Mystery in a Foreign Setting; a 2016 Barry Award Best Novel Nomination for my seventh in the series (Devil of Delphi); Library Journal selecting my ninth book as “one of the best books of 2018” (An Aegean April); starred reviews and official government citations; and this quote from Fodor’s Greek Islands Travel Guide under a section titled “Mykonos After Dark,” which colleagues say I should consider the equivalent of winning an Oscar: “Some say that after midnight, Mykonos is all nightlife—this throbbing beat is the backdrop to Jeffrey Siger’s popular mystery, Murder in Mykonos.”

My work is published in the US, UK, Germany (German), and Greece (Greek and English), and I’m honored to have served as Chair of the National Board of Bouchercon, the world’s largest mystery convention, and as Adjunct Professor of English at Washington & Jefferson College, teaching mystery writing.

For media interviews and articles about me, please check out the Media page.